How is a brain aneurysm diagnosed

Must all aneurysms be treated? 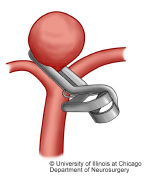 Aneurysms can be treated by embolisation (performed by an angioradiologist) or surgical clipping (performed by a neurosurgeon). The characteristics of each aneurysm and each patient will indicate the best treatment option.