Abnormally dilated arteries that drain directly into veins, also abnormal, there are no capillaries.

They may be chance finding or symptomatic: Cerebral bleeding, generally in the form of an intraparenchymatous haematoma, or intraventricular haemorrhage, but onset may also include epileptic seizures.

They are classified (Speztler and Martin) according to size, whether they are in eloquent areas or not, and whether there is superficial or deep drainage. 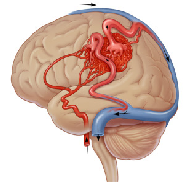 They may be one, two or three treatments in the same patient.

Risk of bleeding: 3% per year.

7% of patients with AVM have aneurysms (flow aneurysms).